"The practice and art of paying attention allows the brain to move into more synchrony, into more balance, into more coherence." ---Dr. Joe Dispenza

The art of Zentangle® naturally includes the art of paying attention. We watch our hands and pen connect to the paper, making our repetitive marks in a deliberate way. As we spend some time doing this, our focus becomes more refined, and our being becomes steeped in the moment itself. Do this every day and see what happens.
If you you care to hear more of Dr. Dispenza, here is a video, chock full of amazing ideas.

Some days there is nothing like a nice straight line to get my attention. The rhythm of each line and where it wants to step is a fun dance for me, so February 16 was such a dance. The tangle is one of Zentangle's orginals called BB. I chose this for a friend whose birthday it was, and who also shares those same initials. I don't often do BB, but everytime I do it I wonder why I don't do it more often! I love this, especially layered along a string, and using it to fill in the sections of the string as a monotangle. The other two days were just random designs, although I'm sure they are tangles somewhere. I just didn't consciously know what they were. I also love shading as an exercise in attention. It gives me a chance to play with the lines all over again, hunting down the things that are behind and in front, or finding edges of a long forgotten string. Paying attention is fun. 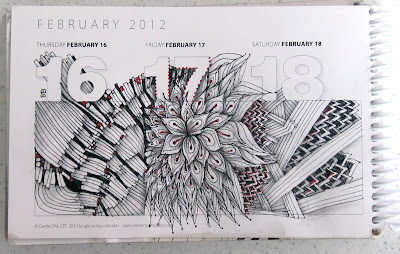 Posted by Carole Ohl at Saturday, February 18, 2012 3 comments: Links to this post 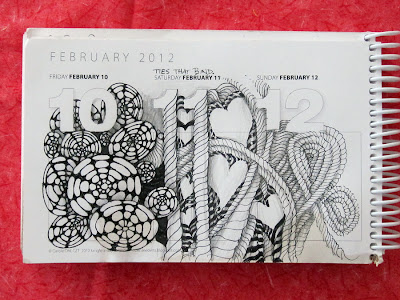 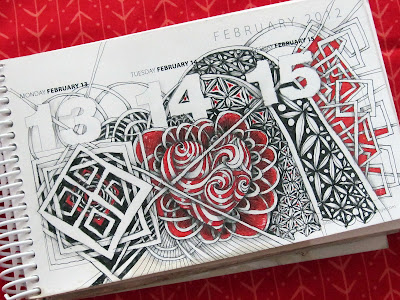 Last weekend was spent steeped in big love. A beloved family member left the planet, so we all gathered to remember his life and share the connections we had around him. Even though it often looks like people float near to us, and then away from us, the ties of love that bind us were evident in the celebration. It seemed fitting that the next few days would bring us Valentine's day.
By Monday I had already done my Diva Challenge before I started in on my calendar entry. I had unexpectedly fallen in love with the square logo presented in the challenge, so I just couldn't help but spill that love again onto another space (Feb. 13). When I did the Fengle heart on the 14th, I figured I might as well add some red to celebrate the holiday. I loved the feeling of the red pen (a Pilot extra fine Precise V5) on this paper, so I backed up and did a little red on the 13th. Then I realized I still loved playing with open boxes that floated behind each other, so today's entry was simply that, coloring the open spaces with the red. 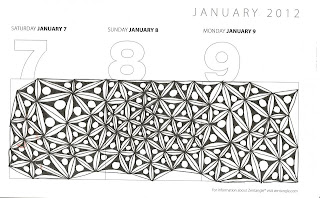 The tangles in between were inspired by CZT Cari Raboin's calendar entry for Jan 7-9, (pictured here) that she posted on Facebook. I was so in love with how she changed the size of her tangle, that I had to try a little of that too! I first thought Cari did Tripoli, but then I thought it might be Fife, so.... the one on my Feb. 14th is Tripoli, and the 15th is Fife.

Thanks to a loving family, CZTs Diana Hirsch, Laura Harms, and Cari Raboin, and of course, Zentangle:) I love how love spills over.
Posted by Carole Ohl at Wednesday, February 15, 2012 3 comments: Links to this post

To dillydally is, by the Merriam-Webster definition, to "waste time by delaying." Yes, it was a day of delaying some things that maybe should have been tended to....like taxes or cleaning the basement. And it is, after all, a Monday: time to get moving. But it was one of those Mondays that came behind a rather large weekend, so it was a little tough to get back in the saddle.
I do make a point on Monday mornings to visit the Diva to see what she has waiting for us in the way of a big juicy Zentangle® challenge. This week's treat was offered by a guest challenger,  CZT Diana Hirsch. Diana used her challenge to raise awareness for The Four Diamonds Fund.
Using the organization's logo as a string, and then using only diamond-esque tangles to fill the string, was a particularly challenging request for me. Most days, making a diamond shape just doesn't fit my natural rhythm. I don't know why it's so different than a square, which gives me no trouble. I approached the challenge with a ho-hum, since I had a preconceived notion of my enjoyment level with drawing diamonds. Thinking back, that sounds a little arrogant to think that I should know beforehand what I will and will not connect to before I even start! Oh well, not a surprise really. I have my story and I'm sticking to it (ahem).
The first tile I did was pretty simple. I wasn't into it for a very long time. All those straight lines were not doing a thing for my fun level. Wow how arrogant again, to think that the lines of my pen were supposed to entertain me. geez. ok. Moving forward, the magic of this art form once again took over, and I found myself looking at this tile in a more open way. The more lines I made, the more open I felt, and the more that little creative voice spoke to me about putting other little lines here and there, and where to put some shade. Hmm. I should have known this would happen. If I just shut up to myself about what I think I will like, I might just open myself up to something new and miraculous.
After the first tile, I was anxious to try another. I spent lots of time on this second one. And, by Merriam-Webster's meaning, and maybe some other people's standards of what should be done in a day's time, this dillydallying was getting out of control. I dillydallied and probably even shilly-shallied too! It was great fun.
Thank you, Diana!! And thank you, Laura. And also thank you to Rick Roberts for his post for the day, that I'm sure had something to do with allowing myself to see beyond my expectations, and move forward into something much more wondrous!

As father-in-laws go, Glen was wonderful. As a grandfather, the best kind. These are the ways I knew him. Glen passed on Tuesday and so was on my mind all week. When I looked at my calendar page for the last few days, it felt very joyful to me, although the week was laden with sadness for all of us who will miss Glen. I suppose that what came out onto the pages was the other side of the sadness... a gratitude and joy for the life of a wonderful person. Thanks, Glen. 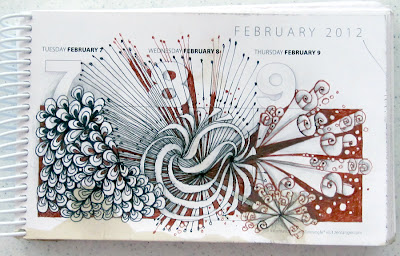 I spilled my coffee yesterday morning, so there is a bit of extra color a the bottom of the page. It's my wish that we accept and appreciate the unexpected color that each day brings.
Posted by Carole Ohl at Friday, February 10, 2012 9 comments: Links to this post

Every Monday morning I visit Laura Harm's blog to see what Zentangle® challenge she offers us for the week. Her commitment of time, love and talent is astonishing, as she has a plateful of stuff in her life that might make most of us forgo the effort it would take to keep up this weekly blog post project. For that we are all very grateful. Which is why it is with so much joy that I say, Congrats, Laura on being voted Top Blog of the Top 100 Teaching Blogs of 2011!!!! You rock the Zentangle, and the Zentangle community by inspiring us every week to participate in the challenge. Whether we post our challenge responses or not, there are hundreds of people who look forward to your Monday morning surprise, each one finding a corner of joy for themselves in the world of Zentangle. Big hugs and kisses to you!
Speaking of the challenge, below is my offering for this week. I was very happy to see that our challenge was to use Tricia Faraone's Sanibelle! I found this one just a few short weeks ago, and LOVE doing it. It was so much fun I did a monotangle first, simply because I couldn't stop once the rhythm started. I then figured I would stretch out a bit and do something else with another tile, so I did Sanibelle around a loop string, and filled the middle with a Baton variation. The shading on Sanibelle is also super fun...

Thanks, Laura and thank you Tricia for sharing your beautiful and playful tangle with us.

Posted by Carole Ohl at Wednesday, February 08, 2012 18 comments: Links to this post

February began with a lot of Koolapopper, Sandra Strait's new tangle. It 'popped' up at the exact time I wanted to begin my daily tangle on the calendar, so I gave it a whirl. The instructions are easy, although I found that I needed to look at the steps each time I did it, as I'm not one to retain the steps when I'm in the groove of drawing the actual lines. It was tons of fun, and I added lines after the basic pattern was put down, sending my brain into all sorts of fun little what ifs, especially when it comes to interconnecting between string sections. I couldn't stop doing this so I did the whole page with this tangle. 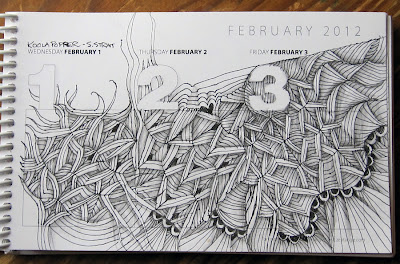 I also added one I call Footlites at the bottom. The steps to this one haven't been published, so this seems like as good a time as any.

Thanks, Sandra for a really fun three days!!!

Posted by Carole Ohl at Friday, February 03, 2012 5 comments: Links to this post

When I designed the Tangle-a-Day calendar, I added some of my own art, mostly because my friends told me I should. I wanted to have big blocks of blank tangling space, but my friends won out.
At the end of January, two thirds of the calendar page is taken up by a big blob of Inapod, with one little square for the day of January 31. Laura Harms had hers finished before mine, and it was so cool that she just extended the already tangled space into her blank one, making it all one big piece of art. Check it out in her Flickr post here. Also check out what Donna Jeanne Koepp did with her page here. What they did was so much fun, that I get very inspired to get mine up to date. I added lots of bubbles to connect my old with my new, and did a variation of Margaret Bremner's Dansk, that sort of mimicked the Inapod. 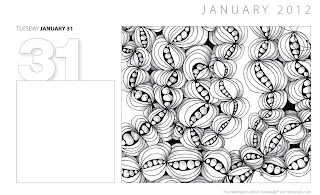 Here is what emerged for me: 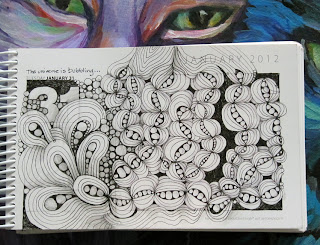 I was needing a little color in my life this morning, so I took the photo with the calendar laying on a painting of my kitties. hello kitty.

This exercise really made me realize how much fun it is to
1) use an existing piece of Zentangle® (or otherwise!) art to play with
2) find an unfinished tile one started long ago, and continue it with fresh eyes!

The Inapod art that I had done some time ago now had another purpose: to jumpstart more art! And my kitty painting: I didn't realize when I took the photo that I would be talking about 'fresh eyes'! It's amazing what the right brain comes up with when the doors swing open! See this entry (under the heading, Inspirational) from the Zentangle website.

Posted by Carole Ohl at Thursday, February 02, 2012 2 comments: Links to this post 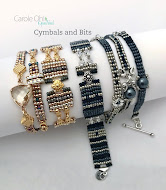 For Special pricing on bulk orders, see the link below